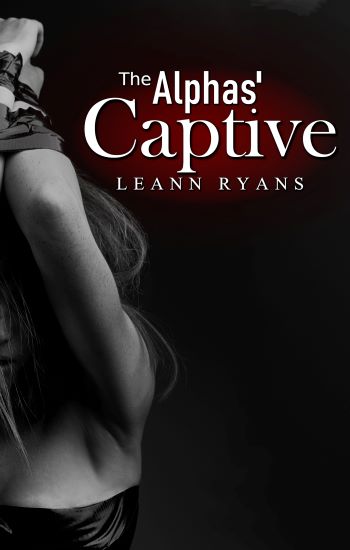 Cara's mother sold her to four alphas. Trapped in a cell, she's lost in the darkness as they use her for their pleasure.

Will she ever see the light again? Does she have any hope of a happy future?

I shivered in the corner of my cell, the concrete I lay on sapping all the heat from my body. I was curled into the fetal position to keep warm, but it was impossible while lying naked in this cold darkness. The only warmth I ever felt was when they used me.

I absently dragged my nails over the filth caked on my thighs. Dried fluids from who knew how many days of use without being washed. The alphas seemed to like their scent on me, and were constantly adding to the mess.

The chain clinked as I adjusted my legs, attempting to ease the soreness between them. I was always sore now. My pussy, my throat, my ass… They were all used daily, never given a break and a chance to heal.

A shadow passed through the tiny patch of light shining through the window in the door of my cell seconds before I heard the lock click open. That was my only warning before the door swung inward on protesting hinges, the light expanding until it stung my eyes. An alpha stood in the doorway, silhouetted by the light beyond my tiny world of darkness.

I rose to my knees, eyes downcast the way that they liked. They wanted me meek and obedient, and they had assured that I would be. I didn't know any of their names, only their different touches and scents. Their different flavors. But they all owned me.

My cell rumbled with his growl, and slick poured from my core. It didn't matter how sore, or hungry, or tired I was, one growl and my body betrayed me. They knew how to get the reaction they wanted from me since biology designed me not to be able to resist them.

He walked forward until he stood in front of me, a halo of light outlining his body. His belt rattled as he unbuckled it and his pants, and a rough hand slid under my chin, forcing my head back.

He smelled of pine trees and the outdoors. It reminded me of winter, when others would put up trees and wreaths. It fit him perfectly. He was one of the largest and the most rugged, though I couldn’t see the details of his features in my cell, and he was definitely the most cold-hearted.

His hand moved into my dirty hair, and he shoved his cock into my mouth. He was so thick it hurt my jaw to stretch open around him, and no matter how many times it happened, I struggled.

I wasn't alone for long before two more alphas came through the door. Keeping my eyes on the floor, slick dripped down my thighs from what I knew was to come. I knelt in front of them as the scent of fresh cut grass and water surrounded me. These two almost always came to use me together, and no matter if I wanted to or not, I enjoyed it.

One of them moved to lay a small blanket on the ground next to me before stripping off his clothes as the other placed a gag in my mouth, buckling it behind my head before pulling my hands behind me and binding them as well. The first alpha lay on the blanket, lifting me over him as he growled and nipped at my breasts. His hands ran up my sides, holding me down against his chest as the other alpha knelt behind me.

He was kind enough to test my opening first, running his fingers through the slick on my thighs before pressing them to my back entrance. Keeping two fingers buried in me, he scissored them as he pressed the head of his cock to my wet cunt, pushing inside to coat his length in my juices. When he pulled out, he removed his fingers and adjusted positions, pressing his cock against the tight ring of my ass.

I moaned as he slid inside. Stopping when he was halfway in, he paused so his partner could cram himself into my pussy as well, before pulling back and fucking into me. The two of them stretching me had me panting around the gag, moaning and delirious with forced pleasure. Slick continued to pour from my core, easing their thrusts into me. It didn't take long for my orgasm to hit, sending tingles from my scalp to my toes. I bucked between them, riding the feeling as long as possible.

Screaming when the alpha below me forced his knot in, locking between my pubic bone and the knot of his partner, my vision went white. He bit down on my breast, his hands gripping my hips as the one behind me held my shoulders to keep me forced down on their cocks.

Tears ran down my face as I gave in and rested on the chest of the alpha below me once he released his teeth from my flesh. They only bit hard enough to bruise, never enough to break skin and bond me to them. I could never quite kill the hope that one day one of them would make a mistake and bite too hard, then save me from this hell.

The one below me unbuckled the gag as his partner released my hands, and I lay between the two, warm and as comfortable as I could be until their knots receded enough to slip from my openings. The alphas redressed, leaving me huddled alone on the little scrap of blanket when I was plunged into darkness again.

This book was previously released as the short story duet In the Darkness and In the Light before it was banned from Amazon.